Facebook recently announced that it is giving users more options when it comes to reacting to friends status updates and photos. Now, alongside the blue ‘like’ thumb we all know, new icons will include a heart (‘love’), a laughing face (‘haha’), a surprised face (‘wow’), a tearing face (‘sad’) and an angry face (‘angry’). Users can opt for one of these new icons by hovering over or tapping the ‘like’ button until an option menu pops up.

Now, don’t get us wrong, we love social media and the opportunities it allows us to meet new people, read interesting articles and watch the latest videos. But is adding negative options such as ‘angry’ and even ‘haha’ good for our wellbeing? 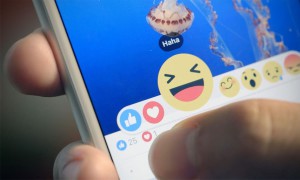 Consider this: if a young person posts something on Facebook about their life, or voices an opinion on a topic, and they are given an ‘angry’ reaction from someone (who they consider themselves to be ‘friends’ with, at least in Facebook terms), isn’t there a chance it could have a negative effect on their wellbeing?

If you were to post something heartfelt, or about something you found difficult or painful, how would you feel if your update got a ‘haha’ reaction?

The introduction of Reactions could have a considerable impact on a young person’s self-confidence and general mindfulness. It is a huge departure from Facebook’s previous ‘like’ function, which tends to be used to rely a positive, supportive message to friends’ updates. By giving users the option to show anger, it is making the social environment a more negative space. Also, Reactions can’t currently be removed, so if a person responds to an update with a more negative icon, they have to stick by that decision. What sort of message is that sending to young people?

With children and young people using the internet more than ever, it’s important that they understand social media isn’t always a positive environment to share their feelings on. This isn’t scaremongering; cases of cyber bullying, particularly amongst teenagers, is on the increase and it’s vital that young people consider how they would deal with a negative reaction from an online friend. ‘Virtually Me - your manifesto for online life’ is an activity book aimed at 10-14 years olds that encourages them to confront both the good and bad sides of social media and enables them to write their own personal guide for getting the best out of their time online.

It’s interesting that Facebook rejected plans to include a ‘dislike’ button, after feedback suggested it was too negative. We hope that the new Reactions icons don’t add to the already immense pressure that some young people feel under when it comes to social media.

Crisps, Cadbury’s Flakes And Vampires: My Quest To Curb Mindless Eating
You Have To Be Out Of Your Mind To Practice Mindfulness

This website uses cookies to improve your experience while you navigate through the website. Out of these, the cookies that are categorized as necessary are stored on your browser as they are essential for the working of basic functionalities of the website. We also use third-party cookies that help us analyze and understand how you use this website. These cookies will be stored in your browser only with your consent. You also have the option to opt-out of these cookies. But opting out of some of these cookies may affect your browsing experience.
Necessary Always Enabled
Necessary cookies are absolutely essential for the website to function properly. This category only includes cookies that ensures basic functionalities and security features of the website. These cookies do not store any personal information.
Non-necessary
Any cookies that may not be particularly necessary for the website to function and is used specifically to collect user personal data via analytics, ads, other embedded contents are termed as non-necessary cookies. It is mandatory to procure user consent prior to running these cookies on your website.
SAVE & ACCEPT