Posted in do, Exercise, wellbeing 0 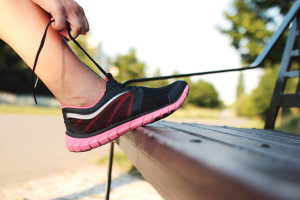 I'll level with you: sometimes when I run people stare at me and I don't think it's because they're impressed with my form. I'm probably an alarming sight as I lumber up the hill, a purple-faced, peri-menopausal vision in Lycra. But when I'm running, I must believe I run beautifully. Effortlessly, gracefully. When I run, in my mind I'm running like a Kenyan. Not like a middle-aged mother of two with a cake problem.

I look fantastic when I'm running

Do not feel self-conscious when you run. Don't let any negative thoughts about the size of your ass cloud your serene, fit, gorgeous mind. You're RUNNING and that means you're doing more for your wellbeing than the guys in the Ford Transit who are pointing and laughing (at least, that's what I tell myself once I've stopped crying).

Of course you're strong! Mentally and physically. You're moving your body, you're defying gravity, you've made the decision to run and you're sticking to it. With every step you become stronger. Every muscle in your body is working to create a stronger you. Never doubt that. Even when you're a vomiting, shaking mess on the side of the road.

Ok, so it probably didn't feel like that when you were having the existential crisis you always go through when you were putting on your running shoes. But you overcame the mental tug of war between the beguiling thought of sitting on the sofa eating a packet of custard creams while watching old episodes of The Golden Girls and the overwhelming urge TO GET OUT THERE AND RUN. If that's not determination honey, then I don't know what is.

Something magical happens to my mind when I run. I mean, I'd read the articles about running helping reduce stress, but I don't think I actually BELIEVED it. Man, was I wrong. Here's the thing: running reduces the likelihood of me behaving like a crazy person. In all kinds of situations; at supermarket checkouts, while shoe-shopping with my husband and also at Parent's Evening. (This is true). Also: the cheese counter where I can sometimes feel overwhelmed with possibilities. So yeah, running soothes my soul. Yours too, trust me.

Running is helping me to become my best self

Ask yourself: are you better off before or after you've been running? As long as nothing terrible's happened (involving an ambulance, blisters or bears) you're probably in better shape AFTER your run, in all kids of ways. The physical benefits are obvious (better weight control, improved cholesterol levels, a great ass) but the self-belief and grit you develop when you run is powerful enough to change your world.

It might not feel like it when you're fartlekking but it is the truth. The mere act of running, of taking control of your wellbeing in such a courageous, decisive way is awe-inspiring. Even if halfway through your run you're convinced you're having a Near Death Experience, you ARE powerful. And every step takes you a step closer to the end of your run so that's all good, yeah?

I am achieving my goals

No matter how far you want to run, how fast you want to do it, or how many kilos you want to be when you get there, with every step you ARE achieving your goals. And they may be rich and varied: smaller dress size, tranquil countenance or marrying Rudolph Nureyev. (That last one is impossible for so many reasons but it's nice to have a dream).

This is true. Personally, the moment JUST BEFORE I put on my running shoes is the worst. I'd rather be anywhere else. Even Droitwich. But once you're heading outta the door, your wonderful running intent shining like a beacon leading you onwards to a PB to make an Olympian weep, you're overcoming apathy. And that's probably the best thing about running. Because to stay in the couch is easier, right? It's always better to do the right thing, not the easy thing. And that's the thing with any kind of exercise - do the right thing. At the risk of quoting a massive corporate strapline, just do it.